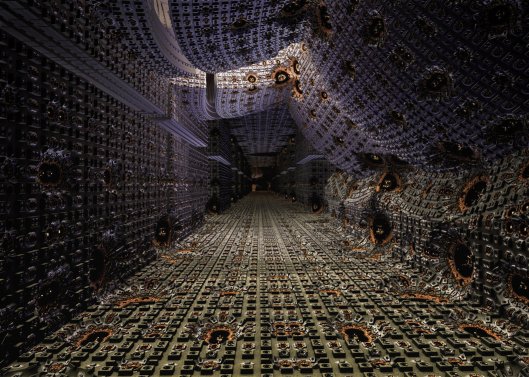 Hex 2214 — Low, domed stone structures peek out of the sands. They extend for miles, and after each windstorm some are completely covered while others are newly exposed. They are entrances to a lost and abandoned city of the Great Race.

This artist is a great source for my vision of the Space Alien aesthetic, Great Race architecture, and Carcosan vistas.

A gross village to drop into your CARCOSA game. Check the download widget for the “carcosa villages” file for the complete write-up. Here is the intro paragraph:

This cursed village’s 130 Bone Men ruled by “The Pervulsient Aeon,” a chaotic Swashbuckler, are undergoing rapid decay into subhuman monstrosities. They ingurgitate from a nearby lake amid a compulsion to scour its shores for despicable relics: the Deep Ones are removed, nevertheless the water remains polluted by an ineradicable malignancy that whelms the Bone Men with a tide of corruption.

These fiends survive by violence, waylaying transients and launching raids on nearby communities. Visitors are unwelcome and the Restorative Orders know this valley is home to death. Exception is made for chaotic types who barter weapons and rude antiques for the right to explore in seclusion the nearby Snake-Men ruins. The location of this village is well-known and the inhabitants despised by their neighbors, but none possess the magnitude required for a campaign of eradication.

I’m coming up with material for plug-in locations in CARCOSA, the first of them is nearly ready. I’ll put them all on one document to download, and add to it as necessary. Here is the preface material that includes some musings on the nature of man and society on CARCOSA:

Some prefatory notes, in no particular order:

Compatibility. This document assumes use of the original edition of SUPPLEMENT V: CARCOSA as default. This is the version that is derived from “the original fantasy role-playing game published in 1974.” Not a slam on the Lamentations of the Flame Princess edition of the setting but I have an aversion to ascending AC and a fondness for level titles, so the original is more aesthetically pleasing when I’m writing out stat blocks. Not a big deal, obviously. If you use the LotFP version of CARCOSA in your game you will need to make some minor adjustments… or not because the differences hardly matter.

0-level Men. Most humans are considered to be “0-level.” Their stats and characteristics are identical to a 1st level Fighting-Man, except they only have 1 HD (instead of 1+1 HD). Unless otherwise noted, all retainers are 0-level men.

Men, women & children. The “13 races of men” are creations of the Snake-Men and are wholly distinct from Earth humans; my vision of the setting specifies additional differences from the norm, regarding gender and reproduction. Males and females of each race are treated equally and perform identical roles within society: hunt, gather, fight, support as needed and according to individual skills. A female warrior is as unremarkable as a male childcare provider.

So when a settlement is described as a “village of 210 Purple Men,” this means 210 combatants, probably fairly evenly divided between men and women. Assume villages include an extra number of non-combatant children (age 9 and lower) equal to 10-40% of the number of combatants. Castles and citadels will have a much lower number of children, if any. Exact demographics are up to you.

Speaking of kids, human females of all races on CARCOSA do not carry pregnancies to term: instead they are egg-layers. This ensures that they are not laid up with child for 9 months at a time and less able to meet the rigorous demands of life on CARCOSA. I’m thinking it goes something like this:

I have no idea if any of this is biologically feasible and maybe it’s better if it’s not, from a strictly “weird” perspective. I also like the idea of the Snake-Men breeding their servants true to their own egg-laying roots. As I develop these ideas I may introduce variations based on race. Blacks may be an Amazonian society: all the males are non-combatants held as chattel, or perhaps even non-sentient and allocated simply as a resource; both Orange genders are capable of egg laying; Purples distribute eggs according to privilege and regardless of true parentage. Maybe I’ll think up something else super weird and creepy, who knows?

Old folks, and the lack thereof. Getting old is frowned upon on a world in which the word “Elder” has seriously unpleasant connotations. Age 40 is sort of a “Logan’s Run” cut-off: anyone who reaches this wise old age is encouraged to embark on a suicide mission designed to accomplish some greater good; the alternative is to be banished or ritually murdered.

Gray-haired, wrinkle-visaged oldsters arriving from “outside” are presumed to be Sorcerers or social misfits, unless they are proven to be members of one of the Restorative Orders (see below). This might explain why development is at a standstill – the most experienced and proficient members of human society are culled at the height of their powers, their expertise squandered rather than passed on to the next generation.

Relations with the outside world and the Restorative Orders. Most villages have very little interaction with the world beyond their walls: they may not know where the nearest other settlement is. Even caravans and trade are infrequent between most villages, which are organized and located with self-sufficiency as a priority. The dangers of CARCOSA are so numerous that the only conceivable survival strategy is to remain inconspicuous and shuttered. This also explains why the races are scattered randomly throughout CARCOSA.

Inhabitants of castles, citadels, and monasteries are more likely to travel abroad. They may be among the Restorative Orders and thus dedicated to spreading enlightenment (see below). They may be militants or brigands, devoted to conquest and banditry. A smaller fraction guard something within their walls; these communities are less likely to be involved in affairs beyond their own horizons.

One exception to the norm of isolation is the existence of the Restorative Orders. These are typically mixed-race groups that travel across CARCOSA from settlement to settlement, sharing news, bringing word of oncoming danger, and spreading knowledge with the goal of uplifting human society as a whole. The Restorative Orders do not have a prejudice against the aged and, in fact, venerate their elders. Many villages welcome the arrival of Restoratives and will either allow them within the village to stay for a time, or prepare a suitable camp just outside the walls. Villages exchange food and shelter for learning, until it is time for the Restoratives to move on to the next community.

Brigands and raiders occasionally impersonate Restoratives in order to catch a settlement unaware. Village leaders are generally diligent about vetting outsiders to avoid unpleasant surprises. Communities that have suffered misadventures in the past will be less welcoming (or even hostile) to any outsiders, including Restoratives.

For new campaigns, Restorative Orders provide a quick and easy way to justify having PCs of different races lumped together in a single group. Such a group can have the goal of exploring the world and gathering treasure, knowledge, and technology and also look forward to at least a polite reception at most communities they encounter.

Settlement stats. Villages, citadels, castles, and other settlements may include stats. Most are self-explanatory. Treasure and resources should be allocated logically, i.e. the leader retains a significant percentage of coins, gems, and exceptional items, the remainder divided among followers or held in some secure location. “Motivations” provide a general guide to generate and explain behaviors, especially toward outsiders.