I’m racing in Richard Guy’s upcoming CARCOSA Wacky Races. For you other racers, my ride is going to be hauling ass so you’ll probably only see a blur go by, here is what my PC actually looks like: 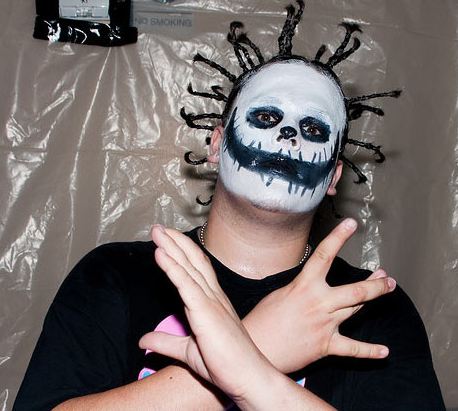 My hooptie is an Ekranoplan powered by dinosaurs – whether that means it’s pulled by a stegosaurus or there’s a peril of velociraptors running on a hamster wheel is yet to be determined. Don’t want to spoil any of its special features yet, but I’m pretty sure I’m the odds on favorite at this point because juggalo.

Blogging lesson: don’t serialize rules ideas, because you might lose focus mid-stream and then you look stupid. I had every intention of following up the Cleric spell rules with rules for M-U spells and magic items as a whole, but I lost my mojo. Hopefully the Cleric content has provided food for thought for DMs interested in bringing their campaigns to CARCOSA for a one (or more) shot, perhaps improvise additional rules in the same vein if you need them.

I’ve hit a bit of a CARCOSA writers block. I wrote up hex 1110 for a hexcrawl over the holidays, but I’ve never been very satisfied with it and tinkering isn’t leading to any improvements. I wrote a short adventure and outlines for a couple more over the past couple months, but again… something’s just not right with any of it.

I’m putting the blame on Thomas Ligotti and Lord Dunsany. I’ve just read them for the first time and they’ve sort of hijacked my creativity. Ligotti was a mixed bag for me – he’s kind of a one-trick pony, but he does that one trick really well. This is based only on reading Teatro Grottesco so maybe I need to give him more of a chance, but right now I feel no real compulsion to explore. Dunsany also a mixed bag, but I’m much more inspired by his world. Again, this is a guy who does one thing very well. Gods of Pegana is awesome and I’m inspired to create a D&D setting book for it. I think I’d just mash some of Time and the Gods in there as well, mostly just for the evocative names. Going to read Welleran soon and looking forward to it.

But in the past couple days I’ve come back to CARCOSA and found I’ve lost the voice, probably due to cross-contamination from these other authors. I’m working on a beginning hexcrawl, a place from which to launch a CARCOSA campaign — a small village in a relatively tame hex (I’m thinking 1014) with several adventures that can lead to bigger things. Slavers to hunt down. A sorcerer who gives you a map. Deep Ones doing shitty Deep One stuff. Velociraptor ambushes. Some books from authors of dubious sanity. I’m scavenging the few parts that work from the half-ass shit I wrote previously and hopefully can use those as a springboard to create the rest. Skimming non-standard sources to expand my thinking: the Conan boxed set, Talislanta, Stars w/out Number… I even peeked inside F.A.T.A.L. for the first time in a while. Going over hexcrawls in Fight On! with a fine-toothed comb.

But I need to get back into the proper creative frame of reference, so I’m re-reading Supplement V  in order to calibrate. As always, I’m reading Swords & Stitchery, which can be dangerous because it threatens to send me off on a Terminal Space trajectory. And I’ve just discovered Songs that the Hyades shall sing…, which I’ve only glanced at thus far but it already has me not quite back in the saddle, but at least looking thoughtfully at the horse. And then there’s JOESKYTHEDUNGEONBRAWLER, who needs no introduction.

Probably a “This Is CARCOSA” post or two would work wonders. More coming soon, hopefully…

I think the easiest way to take CARCOSA for a spin is to drop your current campaign into it for a session or three. That weird teleporter at the bottom of the dungeon, a lich with a dimension door spell, a curse… get your players there however you like. They explore a little, get a sense of the unique style & flavor of the setting, and then you can all talk about whether it’s something you might like to dive into as a full campaign.

This is the first of a handful of posts that will offer suggestions about how to port over spells, magic items, demi-humans, etc. I think you might burn players on the setting right off the bat if you yank away all their shiny toys and abilities, so these suggestions offer a compromise that lets them keep their spells & loot but puts a little CARCOSA spin on the situation. None of this is play-tested so if these ideas turn out to be stupid there’s no one to blame but me, and I don’t really give a crap.

Clerics can turn Cannibals (as Ghouls), Robots (as undead with equivalent HD), and Mummies (as Mummies). Mummy Brains cannot be turned. Space Aliens that witness a Cleric turn a Robot must save vs. spells or suffer an effect identical to an insanity weapon.

Praying for spells can be dangerous and calls to distant Gods are prone to attract unwelcome attention. Total the spell levels requested during prayer; if that number or less is rolled on percentile dice, then roll 1d10 on the following chart:

Ex. a 6th level Cleric prays for his/her full complement of spells: 2 1st, 2 2nd, a 3rd, and a 4th. That totals up to 13 levels of spells requested, which means a 13% chance that something really shitty happens.

Clerics seen casting spells will typically be presumed demonic or sorcerous and treated appropriately; best case scenario, they are only viewed as mutants. This may lead to scenarios in which Clerics are treated as divine, feared and obeyed, or hunted and slaughtered. Sorcerers will take particular interest and be keen to decipher the mystery of any newcomers.

Bless: Works as advertised. Reverse: Curse should be yucky and CARCOSA-themed.

Commune: 75% chance the spell is intercepted by a local dread entity; maybe it pretends to be the caster’s god, maybe it gives false answers, maybe it puts in a personal appearance…

Continual Light: Roll randomly to determine color of light (white, green, dolm, orange, etc.). Black equals UV light. Some colors are more useful than others. Reverse: 50% chance of casting Darkness, 50% instead call down a portion of the interstellar void, any within suffer 3-24hp cold damage per round.

Cure Serious Wounds: If using CARCOSA dice rules, this spell heals 2-3HD of damage. Mutation rules as above. Reverse: Very effective, double damage and caster will be the envy of local Sorcerers.

Detect Evil: ‘Evil’ on CARCOSA is relative, DM use judgment when determining effectiveness; in cases with any uncertainty, spell is ineffective. Reverse: ‘Good’ is also relative…

Hold Person: Ineffective against Bone men, for some reason.

Locate Object: Can this spell be weirded out? I’m drawing a blank… Tracking things down is so crucial to the setting, this could be a very handy spell.

Neutralize Poison: Cleric lays hands and withdraws poison into his/her own body; can discharge venom in a single spittle attack (up to 10′ range).

Quest: Works, and caster will be pestered by local Sorcerers for secret of casting this spell.

Raise Dead: 75% chance a random Old One takes a personal interest in the caster and the recipient: expect minions galore bent on capturing and examining both. Reverse: Local lawful-types will declare war.

Speak with Animals: Works with all Spawn.

Turn Sticks to Snakes: Not snakes, squirmy semi-intelligent 1HD tentacles instead that have a fondness for penetrating victim’s orifices. Once the target is dispatched they will turn on the next nearest victim (including caster and friends).

This guy is an amazing and evocative creative force of the first order and the deluge of background, flavor, charts, and inspiration he inflicts upon the gaming world is is a source of joy & depression for me (as in, ‘Why can’t I do this?’).

Where does the time, energy, and relentless creativity come from? Is he a hell-spawned demon chained to a keyboard in the blackened heart of a stellar cinder? Not sure, but he’s the hardest working SOB this side of Land of Nod dude.

We’re getting a Wii for the kids this Christmas and a preliminary review of their products reveals that CARCOSA is not offered in this format. Hmmph.

Any recommendations for a decent RPG for me? I’m not into the Japanese-style RPGs, but that seems to be Nintendo’s schtick so I might be out of luck. I’ve read some reviews for one called Baroque that looked interesting, anyone have an opinion on that one?

Check out this artist’s amazing work (hope you don’t mind that I cropped it).

The CARCOSA re-release is going to be here before year’s end, and hopefully a lot of new people will be taking it for a spin around the block. First thing players will probably want to do is conjure up some ichor-spewing obscenity from beyond the Outer Void. How easy is that? Let’s take a look at what you need; please note that real-life squick factor is included in grading degree of difficulty:

Colorless Ooze. We’re off to a good start. Simple component, sacrifices are easy to acquire. Degree of Difficulty=2

It of the Fallen Pylons. Gotta be in the right place and make a tough save. DOD=5

Leprous Dweller Below. Difficult-to-acquire components plus a chance of leprosy, and kind of a yucky sacrifice. DOD=4

Lurker of the Putrescent Pits. Pretty easy, but don’t forget that last little bit that most of the grimoires have unfortunately forgotten. DOD=4

Slime God. Can only be performed in one place, and that place is guarded by a cult. DOD=3

Squamous Worm of the Pit. You’re gonna put some miles on your sandals to gather everything needed, and timing is particular. DOD=5

Suckered Abomination. Lots of sacrifices, but they can be of any type. DOD=3

Summon the Amphibious Ones. A little of this, a little of that, timing must be right, but the show-stopper is the sacrifice requirement. This is one that twisted some knickers the first time around. Trusting roleplay group required to avoid real-life discomfort. DOD=9

Summon the Diseased Guardians. Easy-peasy, except you have to feed a bunch of kids to your new pet monsters. Can you handle the truth? DOD=6

Watery Death. Easy ingredients but you have to be a double baby-killer, squick factor ups the ante. DOD=7

Citadels of the Black Dervishes, hills west of the Blighted Lands

Hexcrawl-style writeup of Hex 1109 is available in the download widget in the upper right. Some weird shit going on in the Thaggasoths…

2. Afflicted totem. At the rear of a grassy valley a dozen 3′ white quartz monoliths ring a squat basalt pillar that is crudely carved to resemble a tortured human face in mid-scream. Anyone who caresses the carven face and whispers soothing words will receive a helpful vision (automatically pass a single future saving throw of their choice). The carving will then shatter with an audible sigh of relief.

Check it out and let me know what you think. I’d like to keep doing these hex writeups, format and content are still a work in progress. Let me know what works, what doesn’t, and what else you need. Do you need the stats at the back, or are those superfluous? What about re-purposing old maps — legit, or quit? Any formatting suggestions also appreciated.